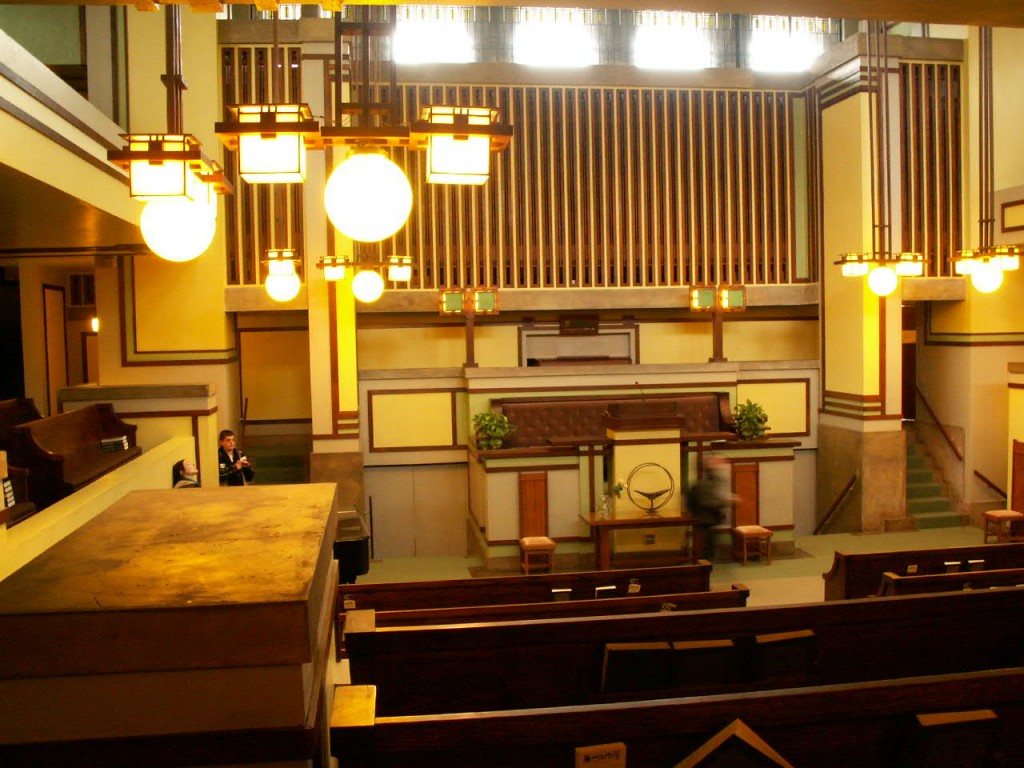 Just outside Chicago, Illinois, there is a village called Oak Park. It was here that the Unitarian Universalist congregation commissioned Frank Lloyd Wright, an architect with 1000 designs and more than 500 buildings built, who was, interestingly enough, Unitarian as well, to build them a new temple after the old one had burned down.

There were several challenges from the get-go, as the budget was underwhelming and there was a number of logistical issues, such as the size and shape of the building site, the number of areas, and the fact that the temple was to be built next to a busy street – all of which was paired with the problem of Wright being required to design the furniture and the stained glass as well.

Wright ‘borrowed’ from his own design. He loosely based his new creation on the building he had done in 1903 – the Larkin Administration building. The chief similarities are the geometric shape and the use of stained glass windows. Another curiosity is that the structure was built completely out of reinforced concrete – something which was simply unheard of prior to this project.

Wright divided the gathering area from the temple area with a loggia. The noise from the street was dealt with in a simple, yet creative way. There are no windows at the ground level of the bipartite building. The light enters the building through the roof and the clerestories. As this was supposed to be a house of worship, he made sure that the temple had good acoustics. Additionally, any and every worshipper could get close to the pulpit.

Wright was passionate when it came to admiring nature and incorporating its principles and beauty into his buildings. The most notable example of this is his Fallingwater, built in Pennsylvania. It was for this reason that the dominant colors of the stained glass he designed for the temple are yellow, green and brown. This also provides an interesting contrast to the building’s serious and solemn look.

This is one of the highlights of Frank Lloyd Wright’s career and legacy, as it is one of the seventeen buildings honored by The American Institute of Architects. It was one of Wright’s contributions to the Architectural culture of the US. Furthermore, it is a National Historic Landmark.

The Unity Temple is historically and culturally significant, but not invulnerable. It took full six years to plan the restoration of this architectural marvel. The restoration was performed by a skillful architect named Gunny Harboe. Ever since 2006, Harboe has made it his mission to restore historic buildings to their former glory and Unity temple was no exception.

It was closed to the public in 2015, in order to deal with water and structural damage. The restoration was completed in 2017. Since then, it has been open to tours and everyone who wants to learn about or appreciate Wright’s work. That is, open on all days, except Sundays – that is when the Unitarian Universalist church has their day of worship.