The contrast between modern and ancient design in churches Most of us have seen our fair share of temples and churches. One could argue that tradition and conservatism go hand in hand with religion, which is why so many ancient churches look alike, or, at least share a number of common elements.

The traditionalists would probably scoff at the mere mention of the word ‘modern’, but we will explore the difference in design that conveys the feeling of the architect, as well as the impression it seeks to make on the average churchgoer. This is a comparison and contrast between the old and the new.

For the sake of this comparison in design, we will limit ourselves to the Christian churches, as the study of various mosques, temples, shrines, monoliths and pyramids could prove to be extensive, to say the least.

Whether it is an abbey or a cathedral, Gothic or Romanesque – the church used to be (and, indeed, in many cases today it still is) viewed as the House of the Lord. This is why churches were usually massive, looking like a palace – the home suitable for the Lord.

The design of this house would follow the architectural zeitgeist – Romanesque churches had barrel vaults, Gothic ones instead applied ribbed vaults and the flying buttress. The Renaissance period returned to classics, like the dome and the columns.

The feeling inspired in the average worshipper was that of fear and awe. The stained glass, the icons, the grey stone, statues and the sheer size of the solemn church would make a visitor feel guilt, hope and obedience, as well as the hatred or at least disdain for the unworthy. 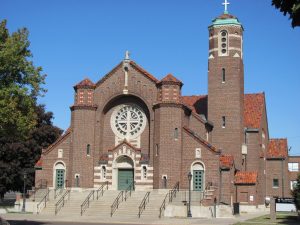 On the other hand, a typical example of a modern church (if there is such a thing as a typical modern church) would be the Christ Resurrection Church in Milan, Italy. Its designers were Cino Zucchi Architetti, known for challenging the notion of following the strict geometrical shape by skewing the roof and/or the walls. The interior of this particular church isn’t theatrical, but peaceful and daily. The exterior is inviting and full of embrace.

Another example of a new temple is Santa Ana’s Chapel in Portugal. The architects, e348, like to use the space creatively, not allowing the potential inhospitality of the terrain to stifle their spirit. Santa Ana’s Chapel looks more like a ship than a church, utilizing the light from all sides – allowing every believer to have the same level of visibility.

So, What Does This Mean?

There is a structure in houses of worship of old – the structure that fails to deviate too much from a pattern. The differences in styles were enacted after many uncomfortable challenges to the traditional formula and were often seen as scandalous, if not blasphemous.

In contrast to that, today’s churches follow a pattern of not having a pattern. Or rather, the architects challenge the idea of ‘house’ and replace it with anything they find suitable (which isn’t to say that the designs are arbitrary, but the opposite of traditional).